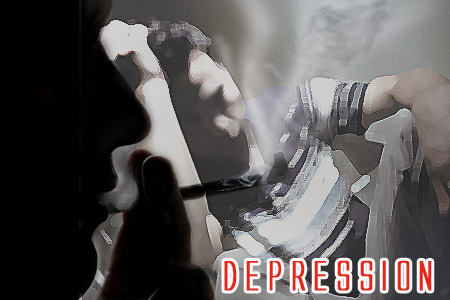 Smokers love smoking. Smoking is injurious to health. These two contradictory sentences have their own viewpoints for smokers isn’t it? Though there are instructions and warnings given on the cigarette packets and warnings/ alerts in the shops and public places, smokers don’t budge from their habit.

Smoking can cause many disorders like sleeping disorder, psychiatric disorder, diseases like cardiovascular disease, diseases of the respiratory tract, asthma, cancer and lung cancer.

Adding to all this through a research it’s found that 41% smokers are at a high risk of suffering depression as compared to non smokers.

The research was conducted by scientists of the University of Navarra, in collaboration with the University of Las Palmas de Gran Canaria and the Harvard School of Public Health (USA). They revealed the direct relationship between depression and tobacco use through a study of 8,556 participants.

The target audiences during these 6 years of the study were the university graduates with an average age of 42. Prof. Almudena Sánchez-Villegas who was a part of this research said, “Over the course of the tracking and data collection stage, 190 smokers who initially did not suffer depression were diagnosed with this disease by a doctor.”

Miguel Ángel Martínez-González, director of the research project and Chair Professor of the Department of Preventive Medicine and Public Health pointed out that “65 people who were not diagnosed indicated that they were taking anti depressants during this period”. Rather these anti-depressants are nothing but a need for drugs to help treat their “depression”.

“Genetic and/or environmental disposition, which will increase the probability that the tobacco habit is retained and that the user will suffer depression as an independent issue”, explained Miguel Ángel Martínez-González on this relationship of depression and use of tobacco.

The strong points of this study have also found that people who had quit smoking 10 years back had very less chances of developing depression than those who never smoked. This was the result of the study, published in Spanish health journal Medicina Clinica. Surprisingly the researchers also found that there was a decrease of physical activity in the free time in the smokers.