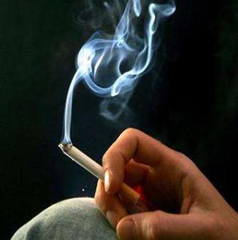 A surprising new study has found that smoking may actually reduce the risk for developing Parkinson’s disease. The study on the whole found that long-term and current smokers were at the lowest risk for the disease.

They found that current smokers exhibited the lowest risk of developing Parkinson’s disease, as did those who had continued to smoke to within five years of disease diagnosis.

A decrease in risk was also observed in those who had quit smoking up to 25 years prior to Parkinson’s disease diagnosis.

It appears that it’s not just cigarette smokers who seem to have a lower risk of developing the condition marked by tremors. Men who smoked pipes or cigars had a 54 % lower risk of the disease, and though the number of chewing tobacco users was small, there was a suggestion of reduced risk associated with this product.

This could be because these groups have more undiagnosed cases of Parkinson’s disease, or perhaps because of genetic characteristics and their interaction with the environment.

The authors admit that don’t understand why smokers would have a lower rate of Parkinson’s, but it’s possible that substances in cigarette smoke, such as nicotine or carbon monoxide, somehow protect and promote survival of brain cells.

Smoking may also somehow prevent the development of toxic substances that interfere with proper neurological functioning.