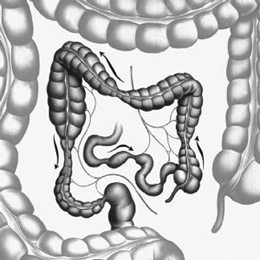 Canadian researchers have announced a new genetic find that may help them in the hunt for early signs of colon cancer.

Researchers at the Ontario Institute for Cancer Research, Cancer Care Ontario and Genome Quebec joined scientists in Europe and the US to analyze DNA from over 10,000 people that included 2400 Ontario locals.

The scientists identified a genetic factor that is linked with 20% to 30% increased risk of developing bowel cancer.

They found that part of chromosome 8, a region of the genome recently linked to breast and prostate cancer also seems linked to colorectal cancer in a surprising large number of people.

Professor Tomlinson’s team identified the genetic link by collecting blood samples from around 1,000 people with a family history of bowel cancer who had developed the disease. They searched for mutations in their DNA that are more common than in a control group of people who did not have the disease. They found a mutation on chromosome 8 associated with the disease.

The results are published in Nature Genetics.

Previously very rare genetic mutations have been associated with the disease. In spite of this, the newly identified mutation which is carried by over half the general population is the most common yet discovered.

However, researchers do not yet know which gene or genes for that matter is affected, let alone how they might cause the disease. But, they say that the findings will help to intensify screening of people most at risk for the disease.