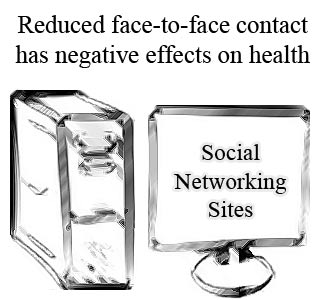 A newly published paper states that frequenting social networking sites could lead to various grave health complications. This paper says that the reduction of face-to-face or personal contact between people could lead to the onset of various diseases or disorders like heart diseases, stroke, dementia, etc. This paper was written by psychologist Dr. Aric Sigman, a Member of the Institute of Biology, Fellow of the Royal Society of Medicine and Associate Fellow of the British Psychological Society.

It is stated that Britons spend approximately 50 minutes per day on socially interacting with other people. Couples spend more time at work and lesser time than before in each others company. It is also pointed out the quality time spent between parents and children, has reduced significantly as compared to a decade ago.

Social networking sites were brought into existence with the aim of bringing people closer, but it seems that they have ended up doing just the opposite. People have started interacting virtually on such sites, and as a result have reduced actual networking in their real life. This could in turn lead to various biological effects on the health of such people.

Dr. Sigman says that social isolation could distress hormone levels, immune responses, and the function of arteries, and influence mental performance, which could in turn lead to graver diseases like cancer, strokes, dementia and heart diseases. People by spending maximum time watching television, surfing the internet, playing video games, etc. have reduced the amount of their physical activity through out the day. Over the past two decades, there has been a rise in the number of people who have reported that they don’t have anyone to talk about their important matters. There has been a rapid decline in the amount of face-to-face interaction over the past decade. This lack of social interaction, in unison with an increasing dependence on technology could have drastic health effects on such people.

Together all these findings have made it clearer that the reduced social connection between people could damage their over all physical and mental health.

Their findings are published in Biologist, the journal of the Institute of Biology.