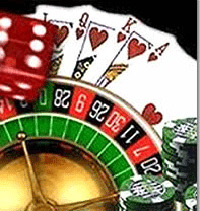 Scientists have discovered a part of the brain that is stimulated by making a wager, a finding that could help in understanding gambling addiction and some mental disorders.

Researchers at the California Institute of Technology asked subjects to choose two cards from a deck and place a $1 bet on whether the first or second card would be higher.

As the wagers were made, the subjects’ brains were scanned using functional magnetic resonance imaging to see which parts of the brain are activated by risk-taking compared to anticipation of a reward.

They found a gambling circuitry in the brain’s subcortex that is controlled by the neurotransmitter dopamine, which is also involved in learning and motivation.

“Pathological behaviours ranging from addiction to gambling, as well as a variety of mental illnesses such as bipolar disorder and schizophrenia, are partially characterized by risk-taking,” the team wrote in Thursday’s issue of the journal Neuron.

Until now, scientists didn’t have a way to tell if pathological decisions were made because of misperception of risk or the high-level cognitive impairments.

The new technique may offer a way to better understand the role of risk misperception and cognitive impairments in pathological cases, they said.