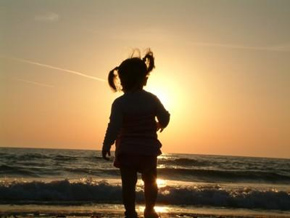 A study has found that children who spend more time in the sun may have a lower risk of developing multiple sclerosis (MS) than those who have had less sun exposure during childhood.

Multiple Sclerosis is a chronic, inflammatory disease that affects the central nervous system.

It can cause various symptoms such as changes in sensation, visual problems, muscle weakness, depression, difficulties with coordination and speech, fatigue, cognitive impairment, balancing problems, overheating and pain.

The study which was published the July 24 issue of Neurology looked at 79 pairs of identical twins.

The twins were asked to specify whether they or their twin spent more time outdoors during hot days, cold days and summer, and which one spent more time sun taning, going to the beach and playing team sports as a child.

The study found the twin with MS spent less time in the sun as a child than the twin who did not suffer from the disease.

The study also found the protective effect of sun exposure was seen only among female twin pairs, but scientists said this novel finding must be viewed with caution since only a few male twins were involved in the study.