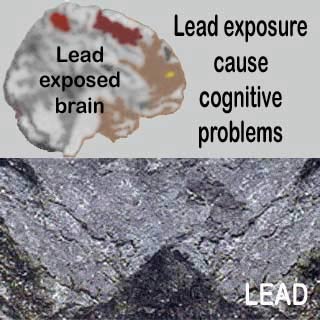 Lead exposure at work is considered very dangerous and may have adverse effects on the human brain. A latest study states that a long term lead exposure in older adults may trigger cognitive complications after the age of 55.

This study was conducted by the Graduate School of Public Health and the School of Medicine at the University of Pittsburgh. It is a follow up on the 1982 Lead Occupational Study.

The study had determined the cognitive capability of more than 250 lead-exposed and more than 150 non-exposed male workers. Their five primary cognitive domains were evaluated; namely, spatial function, executive function, psychomotor speed, learning and memory, and general intelligence. The average blood lead level of the lead-exposed workers was said to be around 40 micrograms per deciliter (ug/dL).

The cognitive performance of the older adults was different from the cognitive performance of the younger adults. It’s also stated that their previous prolonged exposure mattered even long after quitting work at the battery plant. The authors say that, earlier lead exposure is, “particularly detrimental to the aging brain and that specific cognitive domains may be particularly vulnerable.”

Lead exposure also leads to an increase in blood pressure, which could in turn affect cognition.

The authors recommend lower lead exposure at work places in an attempt to reduce the risk of cognitive performance.

Their report is published by the American Psychological Association in the Neuropsychology issue.