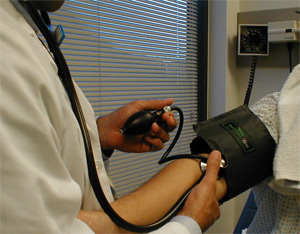 British scientists claim to have found a new method to regulate blood pressure, offering hopes of new blood pressure drugs. This bit of news will surely come as a ray of light to those suffering from high or low blood pressure.

The pathway found in a study by King’s College London involves a process called oxidation (the combination of a substance with oxygen). Until now, oxidation has largely been linked with harm rather than good.

Free radicals (molecules containing oxygen that attack cells in the body) and oxidants, such as hydrogen peroxide, can cause cell damage. But they also play crucial roles in normal cell function.

The scientists discovered that oxidants such as hydrogen peroxide cause a bond to form between two amino acids (building blocks of proteins), which, in turn, activates PKG, an important protein in all tissues, and lowers blood pressure, according to the online edition of BBC News.

According to the scientists, in the cardiovascular system, PKG plays a fundamental role in blood pressure regulation.

Philip Eaton, who led the King’s College team, said: “The research could lead to the development of drugs which activate this new pathway.”

The researchers now plan to explore the role of this new pathway in the events leading to a heart attack.