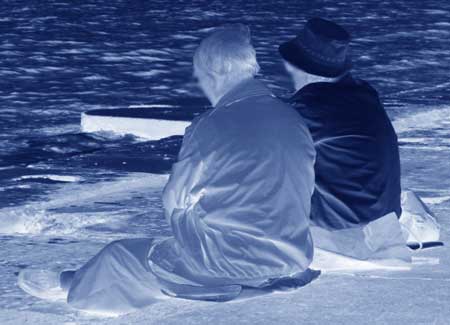 There must be very few people who do not fear from the not-so-easy-life that they will have to live on becoming old. The most common tragedies of getting old are weak bodies and the constant need of help and support for certain things.

Now no one would like to fall down every time they walk, when they get older right? However, looks like scientists want to induce anxiety in us from now on itself as a study made by them reveals that older people are at getter risk of falling and injuring themselves, as well as more prone to depression!

“People with depression and those taking antidepressants, especially SSRIs, are 50% more likely to fall than other older people,” said Ngaire Kerse, lead author of the study and associate professor in the Department of General Practice and Primary Healthcare at the School of Population Health in the University of Auckland, New Zealand. “Falls are very common and risk factors for falls are easy to identify. We need to emphasise fall prevention during treatment of depression in older people.”

As far as depression is concerned, about one quarter of the 21,900 old people reported that they encountered symptoms of depression and 12 percent were took antidepressants to cope up with depression.

“This risk associated with SSRIs has been reported before but not in such a large group of older people living in the community,” Kerse said. “More than 60% of women aged over 80 with depression and taking an SSRI fell in the last year. This means that falls prevention strategies must really be thought of when prescribing antidepressants for older people.”

There were other observations as well, made by the researchers.

The study conducted by GP-DEPS is the largest study so far conducted by to test the impact of education on depression management, as all the GPs in Australia were surveyed. Some of them even took part in a randomized controlled trial for doctors to improve treatment of depression.

“Falls are important for all older people,” Kerse said. “But in people with depression, falls add to the consequences of depression. There is an opportunity to offer fall prevention strategies as part of the initial treatment for depression in patients and as part of ongoing treatment.”

“We need to increase the awareness among family members on fall prevention,” he added. “More than one-third of patients with depression will fall and the consequences can be disastrous. Our findings emphasize the need to incorporate fall prevention strategies in stroke services.”

Researchers note that there is a need for an effective prevention program which include lower leg strengthening and balance retraining as well as home assessment and modification programmes which can help prevent such disasters.

The home hazard assessment and modification are strategies which include appropriate lighting, removing obstacles and installing transfer rails and prevent falls. There is utmost need of the family members to lend support to older people in observing and practicing such strategies to reduce the number of falls.