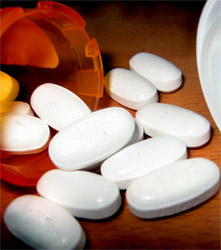 On Friday, U.S. researchers said that a drug used to treat people infected with the AIDS virus has shown promise as a possible future weapon against cancer

Scientists at the U.S. National Cancer Institute examined how drugs called protease inhibitors, usually given in combination with other drugs to fight the human immunodeficiency virus, or HIV, performed against several types of cancer including non-small cell lung cancer.

In a study published in the journal Clinical Cancer Research, the scientists tested whether protease inhibitors would slow cancer cell growth in the laboratory and in mice. Three of six drugs they tried inhibited cancer cell growth.

The most effective of the drugs was nelfinavir, sold by Roche Holding AG as Viracept, the researchers said. The drug also slowed the growth of both drug-sensitive and drug-resistant breast cancer cells, they added.

The researchers have started an initial clinical trial to test nelfinavir in cancer patients.

The researchers examined protease inhibitors because they affect a protein involved in the development of many cancer types. In people with HIV, such drugs can slow the spread of the virus in the body and reduce the risk of developing AIDS-related illnesses.