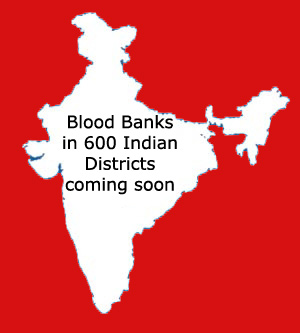 The Indian government together with the National AIDS Control Organization (Naco) and the ministry of health and family welfare are taking some huge initiatives to help curb the shortage of blood supply in India.

Together they plan on setting up a quasi-legal regulatory authority, four large metro blood banks and a battery of blood storage units across India, ensuring an adequate as well as safe supply of blood to patients.

Further, a project is also in the pipeline which will make sure that voluntary donors are never denied blood when they need it.

Anbumani Ramadoss, Union minister for health announced the setting up of the National Blood Authority saying, “It will be an independent authority with both promotional and regulatory aspect. There will be legality to it and we will bring it through a parliamentary act.”

Ramadoss also added that the above mentioned authority will be set up in the around six to eight months, even though parliamentary approval could take as long as three years.

Moreover, the Indian government is also drafting a National Blood Transfusion Services Act which will make it compulsory to offer good laboratory practices, ensure quality of services and lay down penalties for personnel who err. This Act should help to monitor the collection, storage, distribution and supply of safe blood in India.

Ramadoss concluded by saying, “”The Act will provide punitive measures against those violating blood collection, storage and transfusion rules. Blood collection has to be voluntary. At present, donor screening is not carried out to eliminate paid donors. BTA will be functional in three years time