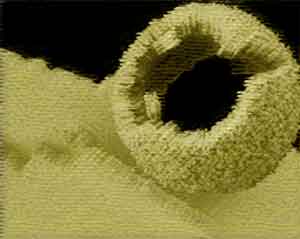 According to the researchers of The University of Texas M.D. Anderson Cancer Center, a protein called PEA-15 curbs the growth of ovarian cancer cells, by forcing the cells to eat into themselves.

Naoto T. Ueno, M.D., Ph.D. associate professor of breast medical oncology and also the senior author states that phospho-enriched protein in astrocytes (PEA-15) is the main factor which indicates the survival of women suffering from ovarian cancer. Ovarian cancer tumors of around 400 women were analysed. This analysis revealed that women with a higher level of PEA-15 had a survival time of around 50.2 months as compared to the lower PEA-15 level women with 33.5 months.

Chandra Bartholomeusz, M.D., Ph.D., and the first author conducted a few lab experiments. These experiments unveiled that high levels of PEA-15 restricts the growth of ovarian cancer cells by killing the cells through self-destruction or autophagy, rather than apoptosis. Autophagy kills itself when a cell traps a part of its cytoplasm in membranes and digests itself, thus leaving a cavity behind. Over a long period of time it eats into itself until it destroys itself and thus the cytoplasm is filled with cavities. In apoptosis, the defective cells perish from self destruction. They harm their nuclei and DNA complex.

Ueno says, “These findings provide a foundation for developing a PEA-15 targeted approach for ovarian cancer and for clarifying whether this protein is a novel biomarker that can predict patient outcomes.”

Ueno’s research team discovered that the protein curbs the growth of cancer in two ways depending on its cell location. PEA-15 restricts the main culprit in the growth, stability, and differentiation of cells. This protein is called the extracellular signaling related kinase (ERK). When ERK get activated in the cell nucleus, the growth of cancer cells begin. The researchers discovered that PEA-15 holds on to ERK in the nucleus and pushes it out in the cytoplasm, thus curbing its growth. Secondly, PEA-15 in the cytoplasm forces self-cannibalization and thus prevents the growth of cancer cells. According to Ueno, the PEA-15 effects are mainly based on its location in the cells. Ueno further states that, “PEA-15 offers us a new dimension for potentially targeting ERK. We’ve shown with high levels of PEA-15, women with ovarian cancer are surviving longer.”

Ovarian cancer cells were divided into two groups, where one group had PEA-15 in the ovarian cancer tumor cells, while in the second group the proteins were removed from the cells. An increase of 115% was noticed in the cancer cells, when compared to the group which still had the protein in them.

Ovarian cancer is a dreadful tumor which kills around 15,000 women every year in the United States. It is also very difficult to detect this disease in its early stages, when it is much easier to diagnose it.

The researchers believe that the level of PEA-15 in the cancer cells may also influence the effect of the other drugs used against the disease. The positive effects of PEA-15 in breast cancer are also under study.

This study was published in the Cancer Research issue.