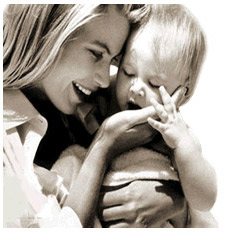 A British research has found that mothers who cradle their baby in their right arm are more likely to be suffering from stress than those who hold their child on the left.Lead researcher Nadja Reissland, from Durham University, said the findings could help identify mothers who are in a fragile mental state.

“It is a tendency, not an absolute, and just because a woman cradles on the right it does not mean she is stressed,” Dr. Reissland said

The study, published in the Journal of Child Psychology and Psychiatry, looked at 79 new mothers who were asked to pick up their babies and hold them naturally.

They were also asked questions about their mental state.

A total of 44 showed signs of baby-related stress and of those, 32 per cent held their child with their right arm.

Of the mothers who reported no symptoms of depression or stress, only 14 per cent cradled their babies on the right.

While the number of women taking part in the study was small, it mirrored the results of a study carried out at Switzerland’s University of Basel, the results of which were published earlier this year.

In that study, women were asked to place their hands in freezing water – causing them stress – before holding a doll.