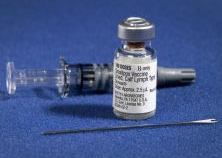 The Food and Drug Administration announced it has approved the first smallpox vaccine in more than 75 years.

ACAM2000, made by Acambis Inc. of Cambridge, England, is the first smallpox vaccine to receive FDA approval since 1931. The drug, which has gone through several clinical trials, is designed for people who are at “high risk of exposure to smallpox and could be used to protect individuals and populations during a bioterrorist attack,” the FDA said in a news release.

The same announcement informs that the Centers for Disease Control and Prevention paid $30 million for 10 million doses of ACAM2000 in 2006.

Smallpox was eradicated in 1977. The last fatal case was reported that year, in Somalia. Among the contagious disease’s symptoms are fever, muscle pains, vomiting, and aches.

Scientists fear that the virus, which can be fatal, might be chosen as a biological weapon by terrorists, especially after the tragic Sept. 11 attacks.

“The licensing of ACAM2000 will make us better prepared as a nation because it provides an important, effective tool for protecting first responders and individuals with a high risk of exposure from this potentially lethal disease,” Rear Adm. W. Craig Vanderwagen, M.D., assistant secretary for preparedness and response, said in the news release.

ACAM2000 is based on Dryvax , an older vaccine formerly made by Wyeth until 1979, when smallpox was no longer a threat.

The FDA also said that the drug would not be available only for those most exposed to smallpox but also to the general population.