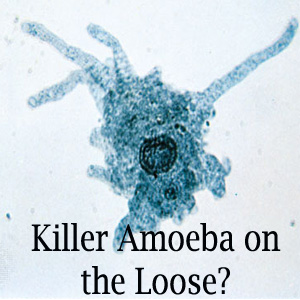 US health officials have said that they are very much concerned about a rise in the number of people killed by a microscopic bug living in lakes. This killer amoeba enters the body through the nose and attacks the brain where it feeds. This eventually leads to death.

In spite of encounters with the deadly bug have been extraordinarily rare, it has already taken the lives of six boys and young men this year.

Now that the killer amoeba cases have increased, US health officials are terribly concerned and they are predicting more cases in the future.

Michael Beach, a specialist in recreational waterborne illnesses for the Centers for Disease Control and Prevention said, “This is definitely something we need to track. This is a heat-loving amoeba. As water temperatures go up, it does better. In future decades, as temperatures rise, we’d expect to see more cases.”

According to the CDC, the amoeba, called Naegleria fowleri, killed 23 people in the United States, from 1995 to 2004. This year health officials noticed a spike with six cases – three in Florida, two in Texas and one in Arizona. The CDC knows of only several hundred cases worldwide since its discovery in Australia in the 1960s.

In Arizona, David Evans said no-one knew his son, Aaron, was infected with the amoeba until after the 14-year-old died on September 17. At first, the teenager seemed to be suffering from nothing more than a headache. “We didn’t know,” Evans said. “And here I am: I come home and I’m burying him.”

After doing more tests, doctors said Aaron probably picked up the amoeba a week before while swimming in the balmy shallows of Lake Havasu, a popular man-made lake on the Colorado River between Arizona and California.

Though infections tend to be found in southern states in the US, Naegleria lives almost everywhere in lakes, hot springs, even dirty swimming pools, grazing off algae and bacteria in the sediment.

The amoeba destroys tissue as it makes its way up into the brain, where it continues the damage, “basically feeding on the brain cells”, Beach said.

People who are infected tend to complain of a stiff neck, headaches and fevers. In the later stages, they will show signs of brain damage such as hallucinations and behavioural changes, he said. Once infected, most people have little chance of survival.