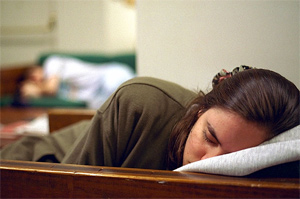 Researchers in Britain have found that regular naps may help reduce blood pressure levels in people suffering from hypertension.

While earlier studies had said that this practice may slightly increase the risk of heart attack, newer and more controlled studies have shown an inverse relationship between siestas and fatal heart attacks.

A recent study by Mohammad Zaregarizi and other researchers at the Liverpool John Moores University in Britain has found that the time just before you fall asleep is where beneficial cardiovascular changes take place.

Their study provides a detailed description of changes in the cardiovascular function of healthy individuals during daytime sleep. It compares napping with other daytime activities such as standing and lying down without going to sleep.