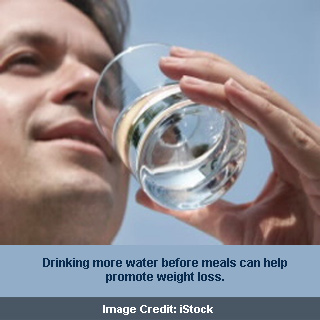 To lose excess weight, individuals adopt several methods and technologies. The following article provides an option that seemingly requires no prescription, has no common side effects, and costs almost nothing. Investigators suggest that just two 8-ounce glasses of water consumed before meals helps lose weight.

Though water has been known to benefit people wanting to lose weight, the current study provides a scientific reason for this. The authors triggered a randomized, controlled clinical trial for comparing weight loss among dieters drinking water before meals to those who do not. The study encompassed 48 adults aged 55-75 years. Investigators categorized the study subjects in two groups. While one group was made to drink 2 cups of water followed by meals, the other did not consume water prior to their meal. The outcome was that after a period of 12 weeks, water drinkers apparently lost around 15.5 pounds and the non-water drinkers lost about 11 pounds.

Brenda Davy, Ph.D., senior author on the study alleged, “We are presenting results of the first randomized controlled intervention trial demonstrating that increased water consumption is an effective weight loss strategy. We found in earlier studies that middle aged and older people who drank two cups of water right before eating a meal ate between 75 and 90 fewer calories during that meal. In this recent study, we found that over the course of 12 weeks, dieters who drank water before meals, three times per day, lost about 5 pounds more than dieters who did not increase their water intake. People should drink more water and less sugary, high-calorie drinks. It’s a simple way to facilitate weight management.”

Water is helpful in reducing weight, probably because it fills up the stomach with a substance that has zero calories. On consumption, an individual may feel fuller and eat less calorie-containing food during the meal. Also drinking water as a substitute to sweetened calorie-containing beverages can seemingly benefit people to lose weight. Even diet soda pop and other beverages with artificial sweeteners are claimed to benefit people by decreasing the amount of calorie intake and lose weight.

But beverages sweetened with sugar and high-fructose corn syrup may be high in calories and should be avoided. The experts ascertained that a 12-ounce can of regular soda pop contains approximately 10 teaspoons of sugar. Though exact requirements for water are not known, it was advised that women should consume around 9 cups of fluids like all beverages including water every day. For men the recommendation is almost 13 cups of fluids. It was mentioned that over consumption can possibly lead to water intoxication, which is a rare but serious condition.

The study was presented at the 240th National Meeting of the American Chemical Society (ACS).