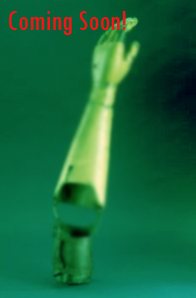 Scientists are working on a motorized prosthetic arm that responds directly to signals from the brain, allowing it to perform more functions than existing artificial arms. The arm, being developed at the Rehabilitation Institute of Chicago, allows wearers to open and close artificial hands or bend and straighten elbows almost like natural arms.

In comparison, it takes time to learn the use of traditional artificial arms, which are also limited in the number of movements they perform.

“The idea is that when you lose your arm, you lose the motors, the muscles and the structural elements of the bones. But the control information should still be there in the residual nerves,” said Todd A. Kuiken of Northwestern University who is developing the arm.

Kuiken decided to take the residual nerves and connect them to the chest muscles so that the signals can be used to move the artificial limb.

He and his team have demonstrated that the new arm has the potential to provide even more arm and hand movements, beyond the four already achieved.

Kuiken, who has been working of artificial arms since the 1980s, recalled his first patient. He took four nerves that had gone to the amputated arm and redirected them to the patient’s chest muscles.

When the patient wanted to close his missing hand, the signal traveled to his chest and caused the chest muscle to contract.

To use the contraction to move the prosthetic arm, he used an electromyogram (EMG), which picked up the electrical signal from the contracting muscle.

The signal was then directed to a microprocessor in the artificial arm, which decoded it and executed the required action.

Kuiken and his colleagues are now working with the US Army.

“We’re excited to move forward in doing this surgery with our soldiers some day,” he said. “We’ve been able to demonstrate remarkable control of artificial limbs. It’s an exciting neural machine interface that provides a lot of hope.”