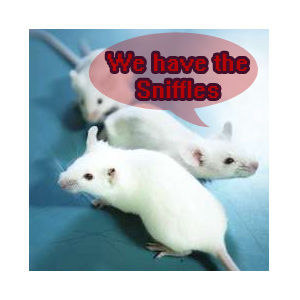 Researchers could be one step closer to finding a cure for the nasty common cold. Genetically engineered mice which can catch a cold may soon be the new guinea pigs for scientists who are looking to find and effective cure for the sniffles, which has no surefire cure till date.

It was professor Sebastian Johnston, a virologist at Imperial College London, who achieved success in infecting mice with the virus that causes the common cold. In fact, his work has been termed significant as this is the first time that a non-primate has caught a cold!

Only humans and chimpanzees were known to be susceptible to rhinoviruses, which are the main group of common cold viruses, explained Professor Johnston adding that this is one of the reasons why research into possible cures for the common cold have been so slow.

“Rhinoviruses are a major cause of the common cold and if you have a small animal model, it speeds up the rate of discovering new potential treatments. And rhinoviruses are not innocent viruses. They kill people in large numbers from acute asthma attacks and chronic bronchitis and emphysema,” he stated.

For the study, Professor Johnston’s team modified the genes of the mice so that the cells lining their respiratory systems had a human version of a “receptor protein” called ICAM-1, which rhinoviruses use to infect the cells.

“We previously found that once inside the mouse cell a rhinovirus reproduces itself as well as it does in human cells. But the virus couldn’t infect the mouse cell because the receptor which acts like a door key wouldn’t let the virus into the cell,” he said.

“Now we’ve modified the mouse receptor so it is more like a human one. This means the virus can infect the cells of these modified mice. We found that mice with the modified receptor were susceptible to infection with a rhinovirus,” he added.

The study could help advance the understanding of life-threatening respiratory attacks that result in asthma, bronchitis and other serious lung infections.