According to recent studies, belly fat can lead to an early death, irrespective of normal over all weight. The waist size increased the person’s death risk. 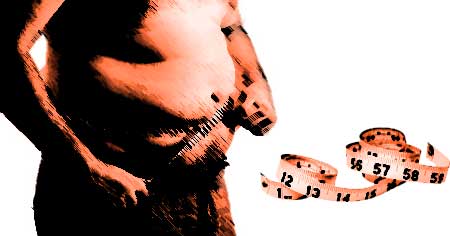 It is believed that people who carry excess weight on their mid-section stand a higher risk for heart attacks and strokes. Besides heart diseases, they are prone to acquire more diseases like diabetes, age related dementia or maybe even cancer.

Researcher at the German Institute of Human Nutrition in Potsdam-Rehbruecke, Germany, and the study’s lead author Tobias Pischon says, “Our study shows that accumulating excess fat around your middle can put your health at risk even if your weight is normal. There aren’t many simple individual characteristics that can increase a person’s risk of premature death to this extent, independent of smoking and drinking.”

The researchers measured the abdomen fat in two ways: waist circumference and waist-to-hip ratio. More than 30,000 volunteers, who were enrolled in the ongoing European Prospective Investigation into Cancer and Nutrition (EPIC) health study, were studied for a period of ten years. During this time span more than 14,000 volunteers died.

It is believed that men and women with a waist size of more than 40 inches and 35 inches respectively had double the risk of premature death as compared to their smaller waist counterparts. Supposedly every 2-inch increase in the waist circumference was linked to- around 17% in men and 13% in women – an increase in premature death risk. Pischon says, “Having a large waist circumference is related to a higher risk of death. This is even true for people who — in terms of BMI — would be considered as being normal weight.”

An internist at New York University Langone Medical Center, New York, said, “Fat is a problem. Obesity of all kinds correlates with heart disease, stroke, diabetes, and more. But, abdominal fat is a more rudimentary indicator of risk. The bottom line is, if you want to live a long and healthy life, eat right, exercise and reduce stress. Fat is bad for you, period.”

It is said that belly fat clinically called visceral fat, produces more inflammation as compared to the accumulated fat found in other areas of the body. Inflammation is believed to be the main culprit behind heart diseases and many other chronic diseases.

It is recommended to increase physical activity and exercise regularly in order to get rid of excessive fat accumulation.

This study is published in The New England Journal of Medicine issue.