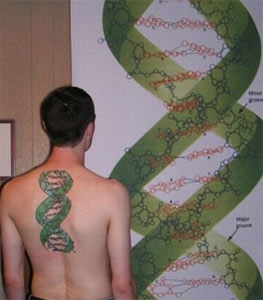 Tattoos have played a huge part in human culture for thousands of years and now they have become a form of expression these days, with almost every second person sporting at least one. Now, this form of art could soon become the vaccine of tomorrow, improving your health, rather than just your image!

German researchers have carried out a study on mice that showed that tattooing could be an effective way to deliver a new generation of experimental DNA vaccines rather than standard injections which are given in a muscle.

According to Martin Mueller of the German Cancer Research Centre in Heidelberg, “Delivery of DNA via tattooing could be a way for a more widespread commercial application of DNA vaccines.”

By using fragments of DNA to stimulate an immune response, the researchers seem to have discovered a promising way to make vaccines more effective for just about every ailment under the sun ranging from cancer to flu.

“The greater damage to the body caused by the tattoo needle may explain the better immune response,” added Dr. Mueller.

The level of antibodies indicates the strength of the immune system’s response. This said, during the study with mice, it was found that tattooing a vaccine produced 16 times more antibodies than a simple injection into muscle tissue.

As of now, there are no approved DNA vaccines in the market. However, a number of drug companies are conducting clinical trials and investing in this technology that seems to show a lot of potential. In fact, drugmaker Pfizer bought over British pioneer PowerMed, having huge faith on DNA vaccines.