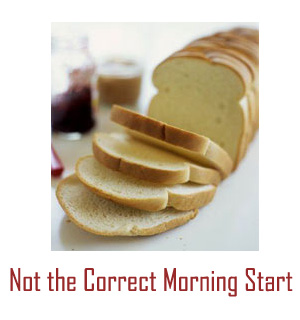 There are three whites that most of us are apprehensive to have in our dietary intake –Sugar, Salt and Wheat Flour.

It’s truly difficult to refrain from any of them, but perhaps the news that we are just about to report may offer you just one more reason to avoid picking up that slice of white bread from the breakfast table.

According to a study conducted by the University of Sydney in Australia, having a breakfast of white bread and sugar-rich cereals may increase a person’s risk of being struck by diabetes, heart disease, and even cancer.

Basing their study on the evaluation of 37 diet studies which involved approx. two million people worldwide, across the world, the researchers examined the effect of eating foods with high glycemic index (GI), a measure of how different foods affect blood glucose levels.

In addition, the researchers also noted that a high GI diet could also be linked to gall stones and some types of cancer.

As per the lead author Alan Barclay, the impact of high GI foods on the probability of having diabetes was “not surprising” as such foods increase blood glucose and insulin levels.

Though this bit was not very shocking, what pretty much surprised the team was the established “strong relationship” that these diets had with cancer.

Barclay maintained that high GI foods lead to constant spikes in blood glucose and, thus, increase insulin and a related substance called ‘insulin-like growth factor one’, both of which add to the risk of developing cancer.

The world-first study has been published in the American Journal of Clinical Nutrition.

So if you advocate that low GI foods help maintain healthy weight and avoid disease, then guess what, you’re absolutely correct.