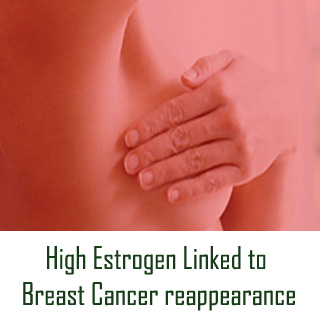 A direct link between high estrogen levels and the return of a higher risk of breast cancer has been established by a team of U.S. researchers. Though it was well known that the initial development of breast cancer was linked to more estrogen in the bloodstream, the possibility of whether women treated with estrogen-blocking drugs like tamoxifen were still exposed remained vague.

All the same the latest study ascertains the fact that women who have a past history of breast cancer have to take a few more steps to lower their estrogen levels. Regular exercise and weight management are amongst the steps included to keep the estrogen levels in check.

It was found that women whose cancer reappeared had more than double the concentration of estrogen as compared to women who were not affected by the fatal disease. A special emphasis has been given on regular exercising and weight management because the component estrogen accumulates in the fat and promotes tumors. Thus keeping the weight down is equivalent to lowering the risk of the cancer growing back.

153 women who were free of cancer and 153 women affected by the disease participated in the study. All the women had received similar treatments, which for many included drugs such as tamoxifen that curb estrogen in the body. However, according to doctors the drugs may not be sufficient to reduce estrogen’s activity in women with especially high levels.

The findings appear in Cancer Epidemiology, Biomarkers and Prevention.

In the past it was known that several factors, including the size and type of a tumor, and whether the disease had spread to surrounding lymph nodes determined the intensity of cancer. However, the latest revelation adds to the list.