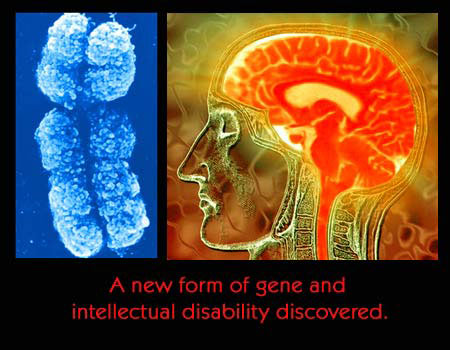 According to a topical scientific research by The Centre for Addiction and Mental Health (CAMH), a new type of intellectual disability which involves mental retardation (MR) and eye defect retinitis pigmentosa (RP) along with it, has been discovered. CAMH also discovered the previously unidentified gene that is the reason behind this process concerning brain development.

The team has found a mutation in CC2D2A which was headed by Dr. John Vincent, a scientist at CAMH. This change in CC2D2A causes the production of a shortened protein missing the C2, or calcium-binding, domain. The protein mutation results in faulty cell function, which results to MR with RP.

The X chromosome has been found in most of the genes for intellectual disabilities. “This mutation was found on the autosome (The 22 pairs of non-sex chromosomes, which make up the 46 chromosomes in the human body),” says Dr. Vincent.

The Intellectual disability is generally seen in autosomal- recessive inheritance. But this kind of disability has been seen just in four genes yet.
Dr. Vincent mentioned an interesting point regarding. He said, “The new gene, CC2D2A, encodes a protein with domains similar to those found in one of the previous four autosomal recessive MR genes. This link could suggest a common function that is essential for normal brain development”.

In simple words intellectual disabilities are a formation of disorders because of developmental delay or mental retardation involving deficits in cognitive and adaptive development. There would be a detailed extra research by Dr. Vincent and his team so that it can give information and data to the scientists for better research, identify to check and understand intellectual disabilities.

The kind of disorder is found in 1-3 percent of the overall population, and men are affected in greater numbers by this disability.