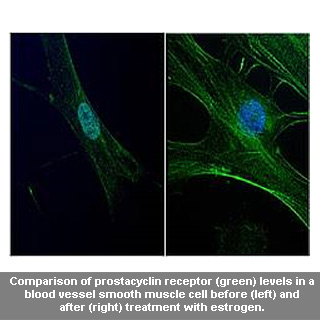 Cardiovascular disease is claimed to be one of the top reasons for untimely death in the Western world. It is said to usually develop 10 years afterward in women as compared to men. Researchers had apparently confirmed it quite some time back that the female hormone estrogen may guard against the disease, but the means of action was uncertain.

Professor Kinsella and Dr Elizebeth Turner have apparently indicated that the prostacyclin receptor may be a chief target for estrogen being adjusted by the alpha, but not by the beta, form of the estrogen receptor protein. Prostacyclin receptor levels may avert platelet aggregation, or blood clotting, and the tapering of vessel walls. The protein may play a function in shielding the body from cardiovascular disease.

Professor Kinsella, commented, “We found that prostacyclin receptor levels followed estrogen levels. If estrogen went down, so too did the amount of this prostacyclin receptor. We now have a clear understanding of one of the ways that estrogen may protect against heart disease. This is really significant in its own right, as it opens up new avenues of investigation for treatment of cardio vascular disease in women and it adds considerable information to the whole debate about the potential benefits of hormone replacement therapy (HRT) for post-menopausal women.”

Ended Connolly CEO of the state agency, Health Research Board, mentioned that a finding like this, which sheds new light into the very core of the disease, has tremendous potential to create new and more effective treatments for patients.

The research is published in the Journal of Molecular Biology.

Pregnant? Do not avoid exercise