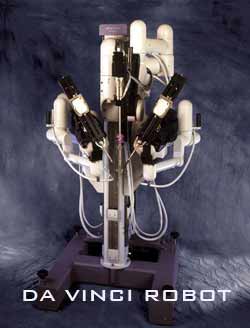 Researchers have noted that a bypass surgery done by a Da Vinci robot is more beneficial to ones health and pockets than what a traditional bypass surgery is. It has been observed that a bypass surgery by the robot lets patients recuperate faster with very few chances of post-surgical complications, need for transfusions and a short period of stay in the hospital. Although using the robot increases the expenses by $8,000 because of the equipment and supplies, it gets cut short due to short hospital stay.

The research studies 100 patients treated by the surgical robot and compared them with 100 other patients treated with the traditional open bypass surgery. While the surgery with the robot needs no incisions but just a few holes to insert the instrument, an open bypass surgery requires cutting across the sternum also known as sternotomy. The ones operated by the minimally invasive surgery needed to stay in the hospital only for 4 days and the ones with higher risks stayed for 5 days unlike the traditional one where normal patients need to stay for 7 days and the ones with higher risks stay for 12 days. Patients with high risk are the ones having other health problems as well, for example, kidney, liver or lung disease.

A year later the researchers scanned the 100 patients using a CT angiography scan and found that the ones treated by the latest technique had less chances of developing clots and narrowing of the bypass graft from 6 months to a year post-op than the ones treated with the traditional method. As Dr. Griffith, also a co-author of the study, notes that 99% of patients who had robotically-assisted bypass surgery had their grafted vessels still functioning and unblocked as compared to open bypass surgery where only 80% of the cases were relieved off the clots and blockage. “Our study shows that there are health benefits to patients from the minimally invasive approach, both in terms of a shorter recovery and also looking at the function of the bypass graft months after the surgery,” says Dr. Bartlett, who is one of the study’s co-authors.

The reason for the differences experienced is that in the latest technique, two internal mammary arteries are used to graft to use them as new blood vessels whereas in the traditional method a vein from another part of the body is used. The latest method ensures long term success and the patency of the operated vein and the result is far superior to the outcomes of the open bypass surgery.

Thus Dr. Poston, the chief of cardiac surgery at Boston Medical Center, concludes that robotically-assisted coronary artery revascularization presents quality of life benefits for patients along with financial savings for those hospitals which care for large numbers of high risk patients.