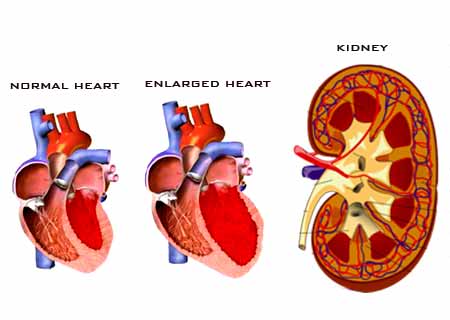 The culprits behind the common problem of heart disease and kidney problems have been identified by researchers. No, this time they are not the high calorie foods or bacteria or viruses but our very own genes.

According to a study published in the journal Natural Genetics, a gene called Osteoglycin (Ogn) that causes the heart to enlarge risking heart attacks has been determined as the key reason by the researchers. Ogn can attimes behave abnormally in some people leading to complications. The role of Ogn in heart diseases had never been suspected by the scientists. It was largely blamed upon factors like high blood pressure and obesity and their combination with genes. Researchers from Imperial College London, the Medical Research Council (MRC), and other international institutions hope that the latest finding will facilitate new ways of treating people with an enlarged heart. Till date the only treatment for this abnormality was ‘lowering the blood pressure’.

Enlarged hearts are caused due to a condition known as elevated Left Ventricular Mass (LVM). This condition is characterised by thickening of left ventricle which is the heart’s main blood pumping chamber. The left ventricle is regulated by Ogn which when behaves abnormally, LVM occurs. The heart then enlarges becoming stiffer. During such an occurrence, the heart needs more oxygen which may result in breathlessness or heart attack. Ogn behaves abnormally when it is present in numbers higher than normal.

According to Dr. Stuart Cook, one of the corresponding authors of the study from the MRC Clinical Sciences Centre and the National Heart and Lung Institute at Imperial College London, now that scientists are unraveling how genes control heart growth, they can gain a better understanding of common forms of heart disease. This should lead to new and more effective ways of treating people.

Professor Tim Aitman, also a corresponding author of the study from the MRC Clinical Sciences Centre and Imperial College London, added, “This study shows how we can use the wealth of new genome technologies for analysing people’s genes to gain a much greater understanding of common human disorders. We already knew that enlarged hearts were linked with conditions such as high blood pressure and obesity but figuring out the genetic causes as well could be key to working out how to treat the condition.”

In a parallel research, Prof. Aitman and Prof. Terry Cook from Imperial College London found that a gene called Jund severed the inflammation of kidney. Jund regulates the activities of macrophages, a group of cells that eats up the cellular debris in kidney, fights pathogens and activates immune cells. Jund is harmful when it is hyperactive causing destruction of healthy kidney tissues leading to renal failure. This malfunction is usually found in lupus patients. Lupus (Systemic Lupus Erythematosus) is a condition where the immune cells in a persons body attacks her/his own body organs leading to malfunction and internal injury.

Professor Aitman, who led the Medical Research Council team, stated, “We are hoping that this discovery will allow us to find a new and effective way of treating this potentially fatal form of kidney failure. By reducing the activity of the Jund gene, we were able to reduce activity of inflammatory cells that can become overactive in certain diseases of the kidney. Such a therapy would be of obvious benefit to patients suffering from auto-immune diseases such as lupus. This would allow them to avoid dialysis and maintain their quality of life.”

This finding has also been published in the journal Natural Genetics.