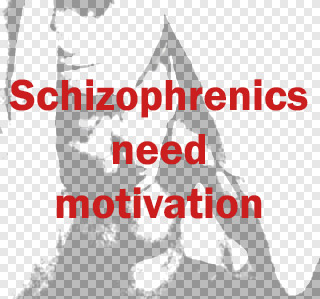 When a person is unwell he needs someone to take care of him, support him, and encourage him in order to recover faster. Patients with psychotic illness are no different. According to a newly conducted study, most of the patients suffering from schizophrenia lack motivation and thus need a better way of treatment. The research is published in the 8 May issue of BioMed Central’s journal BMC Psychiatry.

There are various symptoms which a schizophrenic patient suffers from. Some of them are loss of touch with reality, confused thinking and speech, behavior that does not make sense, emotional flatness or lack of expression, hearing internal voices, inability to start or follow through with activities, memory problems, bipolar-like states etc.

The dopamine hypothesis debates over the issue that strange behavior linked with schizophrenia mostly have variations in the dopamine function of the brain. The possibility lies between the dopamine activity and lack of motivation which is the vital component to develop a new approach acting as an aid for such patients to cope with life.

The National Institute of Health Research, Dr Graham Murray of the Department of Psychiatry at the University of Cambridge and colleagues sponsored this study by examining 18 patients who had the first-episode psychotic symptoms. The study has compared the patients’ presentation with 19 healthy contestants in a computerized test of motivated behavior.

In the reaction time test, the participants reacted faster if the potential reward for completing the task would be higher. This well documented incident happened almost in less than a quarter of the first-episode psychosis group which had the abnormality in the processing of incentive for their actions. Around 11 patients had the intake of antipsychotic medications which were possibly responsible for getting demotivated. However this study observed that medications had no noteworthy effect on the results.

In the past, some critics have suggested that patients’ motivational problems are simply secondary to long-term treatment effects, or institutionalization, but because the researchers studied young adults at early stages of their illness, they could rule out this possibility.

Dr Murray said, “Patients with psychosis already have motivational deficits the first time they present to health services. Understanding the brain basis of these problems will ultimately help in developing new treatments.”

Further the department would try to research whether self-motivation could be safely built in patients with the psychoses using medication which would have drugs triggering the dopamine; which wouldn’t worsen their other symptoms.

Substance in tequila plant possibly combats osteoporosis and other diseases