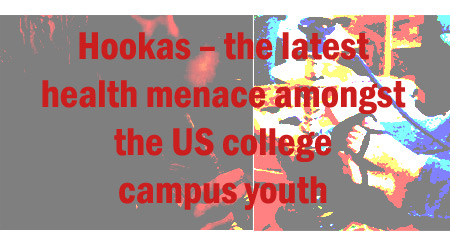 Teens want to stay stylish and updated as per the latest trends. From school kids to college goers, everyone is addicted to some thing or the other like gadgets, video games, sports, chat rooms, online games, branded clothes, accessories etc. But amongst all these teens have now found a way to flaunt their habit of smoking almost by substituting cigarette smoking. The common word used for this new-fangled type of smoking is Hookah.

According to the latest study by a Virginia Commonwealth University researcher, it has been found that United States college students are smoking tobacco using waterpipes or hookahs and it has become a developing public health issue. The findings have been reported in the May issue of the Journal of Adolescent Health.

Thomas Eissenberg, Ph.D., associate professor in the VCU Department of Psychology said, “These results should serve as an alarm bell to anyone interested in public health in the United States. Preventing tobacco-caused death and disease means remaining alert to new forms of tobacco smoking and then understanding the health risks of these new forms and communicating these risks to public health workers, policy makers, and to smokers themselves.”

How does a hookah actually work? The tobacco which is used in the hookah is heated by charcoal, and then the smoke which is created gets passed away through a water-filled chamber. Now here what happens is that the smoke gets cooled before it reaches the consumer or the smoker. But most of the waterpipe users think that having hookah is better as it is less harmful and addictive than cigarette smoking.

Eissenberg has noted that there should be some kind of initiative in spreading awareness regarding the eventual waterpipe tobacco smoking that water pipe smoking is not as benign as they might think. The toxins are similar both in waterpipe and cigarette and disease causing tar and carbon monoxide and also by producing nicotine. Hookah’s consumption time is approximately one hour, while a cigarette may be just 5 to 10 minutes, hence longer the usage period greater are the peril effects on health. Adding to these differences is that smokers tend to consume more and larger puffs with water pipes which lead to inhalation of 100 times more smoke compared to a single cigarette.

Around 744 students mostly under the age group of 18 to 21 were examined through a cross-sectional study via an internet survey which had questions about demographics, tobacco use, risk perceptions and perceived social acceptability.

The findings of the study noted that around 43 percent of the people surveyed used to have waterpipes in the past year and 20 percent of them have smoked tobacco using a waterpipe in past month. Most of the users were in the belief that waterpipes are less harmful than cigarettes as compared to those who never had a waterpipe prior.

Eissenberg and his team are planning to study the prevalence of tobacco usage by waterpipes by undertaking a sample on a national basis in the United States. And furthermore researchers would be able to verify the role of waterpipe among the youth which would indicate a ‘gateway’ for the additional usage of tobacco products or psychoactive substances.