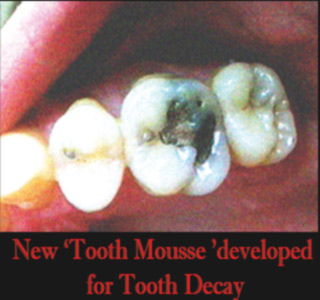 Chocolates, chewing gums umm…….yummy now children can indulge in all sorts of chocolates and pay no heed to parental instructions and warnings, say scientists. According to a new scientific research, a new kind of tooth mousse is being developed which would not only guard against decaying of the tooth but also repairs the decayed teeth.

In The Cooperative Research Centre for Oral Heath Science (CRC-OHS), researchers from Australia and Japan have discovered a technique to use fluoride in a better and effective manner compared to the traditional forms to avoid tooth decay. This noteworthy new product has the ability to penetrate 10 times into the teeth as compared to the current fluoride treatments.

The CEO of the Cooperative Research Centre for Oral Health Science, and the Head of Dental Science at The University of Melbourne, Professor Eric Reynolds, describes Tooth Mousse Plus as a new step forward in oral health care. “Laboratory tests and clinical trials have shown Tooth Mousse Plus not only provides the highest level of fluoride protection now available for teeth, but that it can also repair existing decay damage. It’s the result of a real team effort by molecular scientists, dentists and formulation chemists.”

The treatment functions with a substance combined with fluoride which is to be then inserted in the tooth enamel. Peptide phosphate nanocomplex is known to repair tooth injuries by restoring the minerals lost through the decaying process. The University of Melbourne’s researcher developed the fluoride and nanocomplex combination and that too before it was moved to Tokyo to a lab of GC Corporation Japan-a contestant in the CRC-OHS.

As many as 60,000 patients all over the world in 50 countries benefited from this new tooth mousse treatment, which has come just 18 months back. And in Australia itself 10,000 patients have undergone this treatment.

Approximately 95 percent of all the adults around the age of 38 and above in Australia had the problem of dental decay. And around three-fourth of the Australian adults have not operated their decayed teeth and this could result in tooth loss or even some rare cases serious illness.