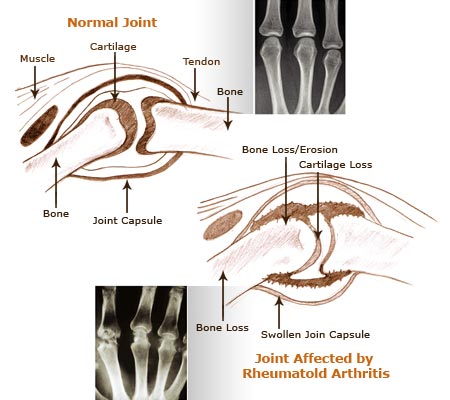 Arthritis occurs in many forms and due to various causes but generically, it is inflammation of the joints. The most common form of arthritis, osteoarthritis, is believed to have an incidence of 4% worldwide and is seen in some form in 3 out of every 4 individuals above the age of 60. It is a degenerative disease and will affect almost anyone in some shape or form with age, and wear and tear. The incidence in India is believed to be much higher with a significant number of cases going without medical attention. Trauma, infection, bad posture and form, and wear and tear are known causes but the condition may be idiopathic in many cases, especially in other forms of arthritis such as rheumatoid arthritis and other autoimmune disorders.

The incidence in most forms is higher amongst women. Rheumatoid arthritis has an incidence of about 1%, mostly affecting people in the age group of 20 to 40. The incidence in India is lower but the prevalence is possibly higher. An autoimmune disease is one in which the body’s immune system attacks the body’s own tissues.

Rheumatoid arthritis is; as of now, considered idiopathic. Though a definite cause cannot be pin pointed, evidence suggests it may be triggered by certain infections in which the infecting agent may closely resemble the body’s own tissues. Even after the infection has subsided, antibodies remain in the bloodstream and attack various tissues. Other factors that may increase a person’s disposition to the condition are smoking and family history of such conditions.

Most commonly involves X-rays. However, this may not be conclusive in early stages of RA. A blood test that tests for the presence of Rheumatoid factor (RF) is most commonly performed. However, the test may not be positive in some cases even in the presence of the disease (sero-negative) and RF is known to be present in some proportion of the healthy population (false negative). A battery of other tests is employed to arrive at a diagnosis. The diagnosis of RA is further complicated by the sporadic nature of its bouts and its misleading similarity to many other disorders. One of the most common of such disorders is Gout. Gout is caused by deposition of uric acid crystals at the joints, which induces an immune response.

Distinguishing symptoms such as pain in small joints (fingers), symmetric nature of prevalence of pain (both shoulders, both elbows, same joints in same fingers on both hands etc), nodules present under the skin, patient history etc have to be configured to definitively diagnose the condition. Patient awareness is therefore, very important.

In all forms of arthritis, the one common feature is pain. Pain is so bad that it literally is debilitating. RA is typically sporadic with intermittent symptom-less periods which can range from few days to a few years during which the patient can resume normal life. Conversely, there are ‘flares’ when the disease acts up. During these periods, the pain may be so unbearable that steroids would have to be directly injected into the joint.

Arthritis is chronic and there is no known cure. The main aim is maintenance, reducing inflammation and easing pain. NSAIDs (Nonsteroidal anti-inflammatory drugs) which are painkillers are most commonly used. In acute conditions, especially during flares, doctors may choose to go for steroidal treatment. It offers quick relief but cannot be continued for a long time because of serious side effects and progressive resistance. Other drugs used are DMARDs (Disease-modifying anti-rheumatic drugs) which are better off being used at the onset to slow down damage. Many different immuno-suppressants may be used to dampen the intensity of the inflammation but this also leaves the patient more susceptible to infection.

Claims have not yet been backed by clinical trials. Homeopathic treatment aims at maintenance but has to be complimented by painkillers as the condition progresses. Ayurvedic treatment aims at balancing the metabolism. However, there is no evidence of RA being metabolism related, unlike Gout.

Maybe considered in severe cases of joint damage. Different surgeries include arthroscopy for ligament and other damage, alignment and re-alignment, removal of jarring structures and in some cases, total joint replacement.

On the field, I’ve met many orthopedic surgeons in interior areas. What I found was there are many patients but few who can afford major operative procedures. Awareness is also a wanting area. Also, most patients in the rural areas approach a doctor when the condition has already advanced. An orthopedic surgeon, Dr. Paris Madgum who I met in Miraj in Maharashtra told me about the kind of patients the doctors see. Having practiced for more than 20 years there, he understands very well the kind of conditions his patients face. Patients come from as far as 100 kms away from the agricultural belt. Years of toil on the fields leads to much weathering of joints. Besides people being unable to afford surgeries such as joint replacement, Dr. Magdum is of the opinion that no matter how advanced a surgery is, maintaining natural morphology is better than any prosthetic. He suggests lifestyle changes to the patients such as change in diet, positions to avoid while working, exercises that strengthen muscles around the joints etc. The best painkillers give only a maximum of 50% relief from pain. If a simple modification such as footwear with elevated soles eases the pain to even 10-20%, it is the best prescription.

Since there are no definitive causative agents, there is little one can do as far as prevention goes. Lifestyle changes such as not smoking, maintaining a good posture and some light exercise would serve everyone well.

Maintain a healthy weight. Extra weight from obesity puts excess unnecessary weight on your joints, especially the knees. This wears out the joints faster and causes much pain.

Consult your physician at the first sign of lasting pain on both sides of the body, reddening of skin, nodules under the skin etc. As in any disease, earlier the diagnosis better is the control of the disease. The next line in most cases would be consulting a rheumatologist who is a physician trained in rheumatic and autoimmune disorders. A rheumatologist can maintain the condition and deal with pain in smaller joints like fingers and wrist. For major joint pain and surgical intervention, an orthopedic surgeon has to be consulted. Forms of light exercise like swimming, yoga or even Tai Chi, as instructed by the doctor help in strengthening joints and making movements easier.

Arthritis is not life threatening but it erodes the quality of life. As the condition progresses, even daily tasks like lifting a glass of water can become a challenge. Commuting to work or elsewhere and performing various tasks all day can become a logistical nightmare. The pain can be so debilitating that a person can loose all will and enthusiasm.

Hence, it is most important to be upbeat about things. If depression is allowed to set in, the condition can worsen synergistically. Inactivity can also do just as much harm. The most trying period for a person suffering from RA is the first few hours after waking up. RA also weakens muscles and patients get fatigued very fast. Pre-exisiting conditions such as varicose veins and neuralgias can worsen the effect. Hence, keeping active is the best thing one can do. Not intense workouts but mild day-to-day physical activity and a brisk walk in the evening would help. But as the condition worsens and/or during severe bouts, even making a fist can become impossible. So consult your doctor about the kind of activities you should and should not be doing. Various prosthetic aids such as instruments to grip or simply, a cane for walking may be suggested. This feature aims not to dishearten but to alert and inform.

Newer techniques and medications are better managing the disorder and enabling people to do much more. Support groups can be a big help. However, not many such formal groups exist in India. But that shouldn’t stop you from starting something new. Involve your friends, family and co-workers. Tell them about the limitations you face and make arrangements wherever possible. A large part of pain that is experienced depends on the psyche’s perception of it. Ask your doctor about techniques of coping with pain.

As mentioned earlier, there isn’t much that can be done for prevention. But we can’t stress enough on the importance of health insurance. A long drawn out illness can seriously dent your family’s financial standing. Joint surgeries are beyond the financial reach of a fair proportion of the Indian population. Costs would increase as one ages with the condition. Would you want your bills to be a burden for your children? And for those of you who still have a “this will never happen to me” attitude, a look at the list of idiopathic conditions that range from RA to damage to the ear drum should change your mind. And remember; a healthy mind is half the battle won.