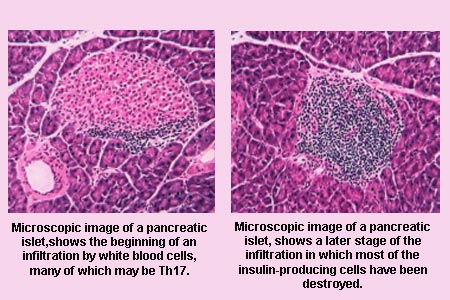 Type 1 diabetes also called as juvenile diabetes is known to be an autoimmune disease primarily affecting children and young adults. In this ailment the body supposedly attacks itself by destroying insulin-producing cells in the pancreas that control glucose, or blood sugar. A team of experts from the University of British Columbia and the Child and Family Research Institute (CFRI) at BC Children’s Hospital has apparently figured out the role of a T cell in type 1 diabetes. The discovery can help determine novel treatment options for young patients.

Elevated levels of Th17 cells which are claimed to be a type of T cell were previously observed in children newly diagnosed with type 1 diabetes. Apparently, Th17 is linked with other autoimmune illnesses like Crohn’s disease. So it can be concluded that Th17 cells are harmful to the human body. It was pointed out that T cells are white blood cells and crucial members of the immune system regulating infections. Among healthy individuals Th17 cells seem to safeguard against bacteria and viruses as it governs the immune system for attacking infected targets within the body.

Rusung Tan, lead investigator, a Pathology professor in the UBC Faculty of Medicine and co-head of the Immunity in Health and Disease research cluster at CFRI, also a member of the Department of Pathology and Laboratory Medicine at BC Children’s Hospital and a senior scholar of the Michael Smith Foundation for Health Research, and colleagues claim that heightened levels of Th17 cells in type 1 diabetes patients indicates that these cells play a major role in early development of the disease. The findings can help gauge new treatments for childhood diabetes that target Th17 cells. At present clinical trials on treatments possibly blocking Th17 cells are being conducted.

The research is published in the current issue of the Journal of Immunology.