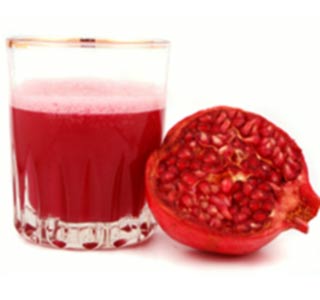 Drinking pomegranate extract trims down on the production of chemicals which leads to irritation or inflammation according to a study published in BioMed Central’s open access Journal of Inflammation. The end results showed that pomegranate extract might aid humans relieving of from the severe inflammatory conditions.

Pomegranate extract is known to be used as an optional medicine for inflammatory conditions for instance arthritis.

Moreover pomegranate extract has the quality of antioxidant and anti-inflammatory actions in the experiments done on isolated tissues. But it’s yet not known whether the ingestion of pomegranate can generate similar anti-inflammatory effects in the body system or the active compounds didn’t soak from the gut.

The research group was from the Department of Medicine of Case Western Reserve University, Cleveland Ohio, and the study was led by Tariq Haqqi, demonstrated that blood samples gathered from rabbits that were fed with pomegranate takes out the inflammation.

According to Haqqi “the use of dietary nutrients or drugs based on them as an adjunct in the treatment of chronic inflammatory conditions may benefit patients”. He adds that, “Current treatment with anti-inflammatory drugs can have serious side effects following long-term use. Further research is needed, however, especially on the absorption of orally ingested substances into the blood.”

In the study the researchers made the rabbits drink 175mls of pomegranate juice. Blood samples were gauged before and after the rabbits drank the pomegranate extract according check the levels of antioxidants.

It was found that the rabbits had greater levels of antioxidants compared to those samples gathered prior to the intake of pomegranate juice. Slowly and gradually the extracts lowered the activity of proteins which results in the inflammation and precisely cyclooxygenase-2. Through the ingestion of this fruit extract the creation of pro-inflammatory compounds reduced which were manufactured by cells isolated from the cartilage.

The findings of the study showed that consuming pomegranates extracts has positive and beneficial effects.