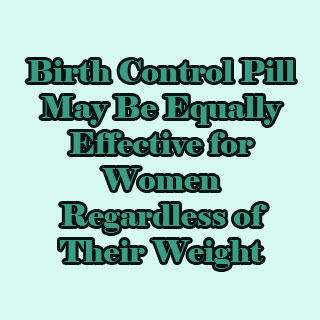 The effectiveness of birth control pills may often be questioned in obese women. Physician-scientists at NewYork-Presbyterian Hospital / Columbia University Medical Center believe that the pill need not necessarily avoid pregnancy in women who are overweight or obese. It was ascertained that the effectiveness of birth control pill is similar in all women regardless of whether they are obese or thin.

While conducting the study, investigators aimed to find the outcomes of the pill within the ovaries of women itself. The study encompassed 226 women who were either normal weight or overweight. All the participants aged 18 and 35 years were randomly selected to consume a lower or higher-dose of the pill. Different dose levels were included to ascertain if obese women require higher dosing as previously believed.

“As a physician, I am relieved by the results of this study. When I prescribe oral contraceptives to my patients with obesity, I can feel confident that I am giving them something that will work,” affirmed Dr. Carolyn Westhoff, principal investigator, professor of obstetrics and gynecology and director of the Division of Family Planning at Columbia University College of Physicians and Surgeons, and an obstetrician/gynecologist at NewYork-Presbyterian Hospital/Columbia University Medical Center.

Around three to four months are probably taken by a woman for adapting to the pill. So after this duration the experts subjected the volunteers to multiple ultrasounds and blood tests. These procedures help evaluate whether or not ovulation was being suppressed. It was mentioned that the main aim of an oral contraception may be to restrain ovulation. 150 women were consistently employing the pill and three of the 96 women with normal weight reported to ovulate. The other 54 women with obesity also appeared to be ovulated. A daily consumption of pill possibly resulted in greater frequency to ovulation.

Dr. Westhoff added, “Knowing that the lower dose works as well as the higher dose will allow physicians to not only help women with obesity avoid unwanted pregnancies, but also protect them from the possible health risks associated with higher doses. For a woman to fear relying on her oral contraceptive to prevent an unwanted pregnancy is a huge burden. This study should put those fears to rest.”

It was suggested that the pill seems to be effective if it is taken every day. Suppression of ovulation may not be dependent on weight, but consistency of pill-taking can be a deciding factor. The ability of the lower-dose pill as well as the higher-dose pill appeared similar in suppressing ovulation in women with obesity. Though the overall risk seems to be small, women with obesity are at greater risk for developing blood clots from consuming any type of pill.

The study is published in the August issue of the journal Obstetrics and Gynecology.