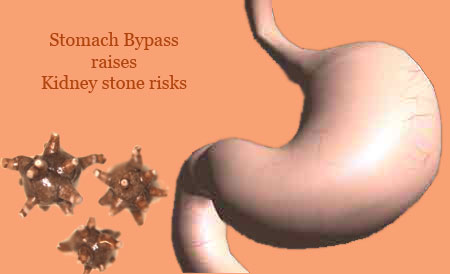 Obesity seems to be making its rounds to the medical news columns on a regular basis. To eliminate obesity, few of the people revert to medical help for banishing obesity and the rigid tummy out of their lives. The process of surgically removing fat from the body by way of a stomach bypass surgery called Roux-en-Y gastric bypass (RYGB) seems to be used on a common basis by the obese people. But the same stomach bypass surgery which can shave off the unnecessary flab raises the risk of another problem, which is Kidney stones.

It was found that the stone risk made its presence felt within three months after the surgery. This definitely seems to be a disappointment for overweight people as although medical science can help them run away from obesity but they are forced to return back to the surgery table with a different ailment.

“Although this study demonstrates that there is a higher risk for developing kidney stones (after RYGB), it is important to weigh the risk against the many benefits that RYGB has for the morbidly obese patient, including decreasing cardiac (illness) and improving diabetes,” Dr. Manoj Monga, from the University of Minnesota Medical School in Minneapolis, mentioned in a written statement.

It was found that RYBG restricts the food in such a manner that makes the stomach hold only to a particular level by making the stomach smaller like a pouch. The surgery reduces the amount of nutrients absorbed because the pouch bypasses parts of the small intestine.

However, let us not treat RYBG as a culprit as by far RYBG is considered to be a safe and effective treatment for morbid obesity. But the new finding about the kidney stone risk seems to raise a fear and an apprehension in patients undergoing or planning for RYGB.

Researchers are yet clueless about the kidney stone risks after the stomach bypass surgery. The researchers found an increase in calcium oxalate in urine which is a known risk factor for the development of kidney stones. Researchers also doubt an alteration in the normal gut bacteria caused by the procedure could result into higher risk of kidney stones.

The study has been published in Journal of the American College of Surgeons, June 2008.