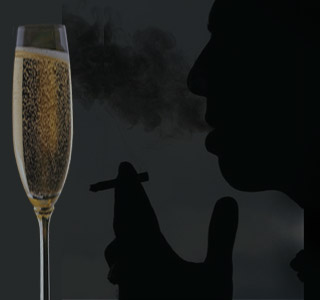 An addition has been made to the list of numerous negative effects that smoking and alcohol intake may have on an individual. Seemingly people resorting to both smoking and drinking alcohol may have a greater risk of developing bowel cancer. This associated risk was highlighted in a study by the experts from The George Institute.

The study investigators have further stated that people consuming alcohol in high quantities (approximately more than 7 drinks per week), may have a relatively 60% higher risk of developing bowel cancer. Seemingly, Australia’s National Health and Medical Research Council have suggested people to avoid the consumption of more than two standard drinks per day.

“The strong, and largely, unknown association between high intakes of alcoholic beverages with risk of colorectal cancer. Most people probably know that being overweight and having poor dietary habits are risk factors for the disease, but most are probably unaware that other lifestyle risk factors such as alcohol consumption, cigarette smoking and diabetes are also important culprits,” says lead investigator, Rachel Huxley, Associate Professor, The George Institute.

The good news is that the risk associated with bowel (colorectal) cancer may be reduced with adequate physical activity. Apparently certain lifestyle changes may be instrumental in lowering this risk.

Huxley elucidates that, “These findings strongly suggest that a large proportion of colorectal cancer cases could potentially be avoided by making relatively modest lifestyle adjustments such as drinking less, quitting smoking, eating healthily and being a little more active. Such changes would also have huge benefits in terms of reducing an individuals’ risk of developing other major forms of illness including cardiovascular disease.”

However having said that, it was also noted that there didn’t seem to be much data suggesting that higher intake of fruits and vegetables may shield a person from this type of cancer.

The findings of this study were based on the review of more than 100 published studies on the link between the risk factors for bowel cancer.