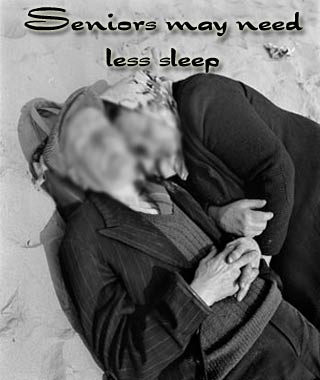 A recent study conducted by Elizabeth Klerman of Brigham and Women’s Hospital and the Harvard Medical School suggests that healthy elderly may be eluded from sound sleep due to their age. Though older adults are known to be lousy sleepers, it may not really be so as seniors lose their ability to sleep with age. The study reveals that other than fewer intakes of sugary and fatty foods, the elderly also need less sleep.

Elizabeth Klerman of Brigham and Women’s Hospital and Harvard Medical School, commented, “The most parsimonious explanation for our results is that older people need less sleep. It’s also possible that they sleep less even when given the opportunity for more sleep because of age-related changes in the ability to fall asleep and remain asleep. While humans can sometimes override the homeostatic set point and not sleep when tired, there is no evidence that they can sleep when they are not tired. The findings may also influence treatment for insomnia in older people.”

Researchers made a comparative study of 18 older adults aged 60 to 76 and 35 younger adults aged 18 to 32. All subjects were healthy individuals not suffering from sleep disorders and not taking any sleep affecting medication. The research gave sleeping opportunities to the subjects during both day and night under conditions that were regulated for circadian rhythms.

The research showed that on spending 16 hours a day on the bed, younger people get 9 hours of slumber as compared to 7.5 hours for older people. The study further indicated that squandering for the same amount of time in bed, older people sleep for a lesser time, taking longer to fall asleep in comparison with younger people who had slept for many more hours than their self selected sleep times which disclosed that they don’t get as much sleep as needed.

With many older adults complaining of insomnia, the sleep changes due to age isn’t something really new. However the contribution of circadian rhythms, social factors, ability of older adults to sleep or shifts in an internal “set point” for sleep need was yet unknown. The study also found that Rapid Eye Movement (REM) sleep associated with dreaming and non-REM sleep were evenly split in older adults.

The analysis recommended that younger adults should sleep more as insufficient sleep apparently leads to accidents, metabolic changes similar to diabetes and errors.

A Cell Press publication, the study is published online in the Current Biology.