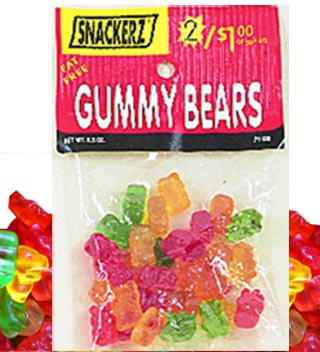 Kids always have loved the yummy Gummy Bears, the confectioneries. Now there is one more reason that they ought to love it and the parents too would love to treat their kids with Gummy Bears. Researchers have found that new improved Gummy Bears consisting of sugar-substitute ‘Xylitol’ can serve the purpose of anti-plaque snacks.

The xylitol can virtually reduce tooth-decays and prevent dental problems revealed a study that was conducted by the researchers at University of Washington. Xylitol is a natural sweetener occurring as a sugar alcohol. It has been discovered that the sugar reduces the ‘mutans streptococci’ (MS) bacteria which is harmful for teeth health and causes tooth decay.

The study was conducted on children who were given four Gummy bears containing xylitol in different concentrations three times a day. After six weeks of giving them the sweets, the kids were examined and it was found that levels of harmful MS bacteria in plaque on their teeth had gone down significantly.

Ly said, “Based on our findings, it is feasible to develop a clinical trial of a gummy-based caries prevention programme. Such a study is now being carried out in the East Cleveland primary school district (Ohio, USA).”

“For xylitol to be successfully used in oral health promotion programmes amongst primary-school children, an effective means of delivering xylitol must be identified. Gummy bears would seem to be more ideal than chewing gum,” said research leader Kiet A. Ly from the University of Washington.

Earlier, Gummy Bears, owing to their sugar content were considered harmful for younger children. Tooth decay has been determined as the most common disease amongst children worldwide. With the xylitol being added in the sweet snacks, the disease can be considerably reduced in Europe and US where the Gummy Bears are popular.