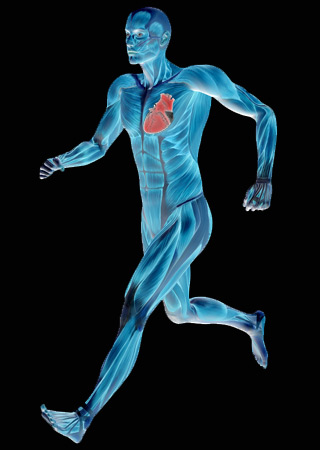 While some people want to access a fountain of youth, some sing “18 till I die”, while some really look young when they are not. However here is how you can really keep yourself hale and hearty and have a young heart in the real sense of the term.

Washington University School of Medicine unveiled the secret of having an evergreen heart. A study conducted by the University in St. Louis revealed that endurance exercises can give one much younger hearts.

“We know that the heart deteriorates as people get older, and that’s largely because they don’t stay as active as they used to,” says first author Pablo F. Soto, M.D., instructor in medicine in the Cardiovascular Division. “Past research has suggested that exercise can reverse some effects of aging, and we wanted to see what effect it would have specifically on the heart.”

The endurance exercises seemed to have benefited women more than men. The heart metabolism rate in inactive people was measured after dobutamine was administered to them during the study, while they were at rest. Dobutamine is a drug that increases the pace of the heart like a person was exercising. Although the heart beat increased, the metabolism of the heart that consists of using up glucose (blood sugar) did not increase.

However, when participants (six men and six women in the age-group of 60-75) were made to do endurance exercises like walking, running or cycling for three to five days a week, for an hour, for 11 months, the glucose uptake increased like in younger hearts. There was a demand of high-energy. The participants went through the programme under the guidance of a trainer.

According to Sotto if the heart does not receive enough glucose to meet the high energy demands, the heart gets into an energy-deprived state that may be very hazardous, giving rise to ischemia (that is low oxygen) and heart attack. Since heart uses both glucose and fatty acids, an assessment on the fatty acids metabolism was also made by the researchers. It was found that in men the fatty acids metabolism reduced with increased energy, in women it increased with energy needs.

“By that gauge, the women had a better response to exercise training than the men,” Soto says. “At this point, the significance of that isn’t clear. We know that in animal studies low fatty acid oxidation leads to heart muscle thickening and that when men train their heart muscle often gets thicker than women’s. It could be that the increase in fatty acid oxidation in women’s hearts with training is a reason why their hearts don’t thicken as much.”

The researchers are now planning to conduct programmes for heart patients. “In the past heart failure patients were told to limit their activity,” Soto says. “Now more and more we’re seeing there is potentially a benefit to getting them as active as possible. We want to know if heart failure patients will experience the same benefit in heart metabolism with exercise that we saw for older people.”

Nevertheless, now that the Pandora’s box has been opened and a secret to a young has been revealed its time to heed to it, keep exercising and stay fit.

The study has been published in the June 20’s issue of American Journal of Physiology.