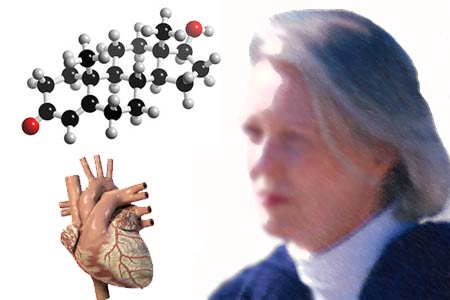 Known to enhance libido and increase energy, Testosterone has another use now. The steroid hormone from the androgen group will be a significant predictor of heart disease during menopause.

A latest study conducted by scientists at Rush University Medical Center revealed the link between testosterone predominance and increase in cardiovascular disease during menopause. The study displayed the prevalence of metabolic syndrome, which has been linked to the development of cardiovascular disease and diabetes and it increases when testosterone progressively takes control of the hormonal milieu while the menopausal transition takes place.

The longitudinal, 9-year-study of 949 participants in the Study of Women’s Health Across the Nation (SWAN) displayed that the incidence of metabolic syndrome saw an upward climb which progressed from six years before to six years after the final menstrual period, independent of aging and other known cardiovascular disease risk factors.

Initially estrogen was blamed, which was thought to exert a direct positive effect on cardiovascular disease risk in women, but now the study gives a better clarity on the hormonal effects.

“Our study data shows that the change in estrogen level is, at best, a weak and non-significant predictor of metabolic syndrome risk,” remarked Dr. Janssen. “A more likely story is that the progressive testosterone predominance exerts a direct negative effect on cardiovascular risk.”

The SWAN study is a multiethnic, community –based, longitudinal cohort study of the natural history of the menopausal transition in over 3300 women enrolled in seven sites throughout the United States.