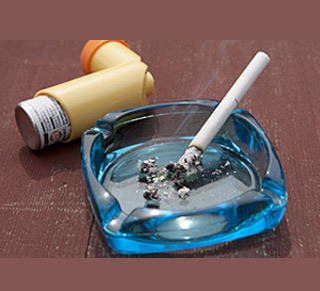 It now seems that asthma is strongly linked with smoking and nicotine dependence. According to a recent study by the University of Cincinnati, individuals diagnosed with asthma have considerably higher chances for a lifetime history of daily smoking and nicotine addiction. The study findings apparently have major implications in the health-space.

At the time of the study, investigators thoroughly scrutinized data from the National Comorbity Survey-Replication (NCS-R). This epidemiological survey was triggered on American adults with and without asthma. Those suffering from the condition probably were 1.26 times more likely to have been a smoker, and twice as likely to have been nicotine dependent at some point in their lifetimes as compared to individuals without asthma. After focusing on nicotine dependence for the past 12 months, a significantly stronger link between asthma and smoking was registered.

Alison McLeish, a UC assistant professor of psychology, and colleagues found that a lifetime history of nicotine dependence was not significantly different between those who started smoking prior to or following an asthma diagnosis. It was revealed that paying greater clinical attention to address tobacco use and dependence in relation to asthma may be important.

The study is published online in the Journal of Health Psychology.