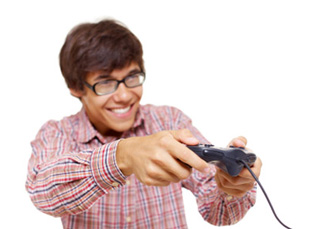 Amblyopia or lazy eye is a brain disorder in which one eye does not develop properly resulting in an inability to see precisely. A new study conducted by scientists at the University of California, Berkeley, has disclosed that video games apparently help enhance the vision of adults suffering from amblyopia or lazy eye.

The study found that participants seemingly encountered significant improvement in visual acuteness and 3-D depth perception after a span of 40 hours was spent in playing commercially available video games. However, people with normal vision may not face any sort of advantage.

study lead author Dr. Roger Li, research optometrist at the School of Optometry and the Helen Wills Neuroscience Institute at UC Berkeley,commented, “This study is the first to show that video game play is useful for improving blurred vision in adults with amblyopia. I was very surprised by this finding; I didn’t expect to see this type of improvement.”

Few options are available for children with lazy eye such as occlusion therapy where a patch is used to cover the normal eye so that the brain uses the poor eye. Findings suggest that if this condition is not treated in childhood then it could lead to irreparable impairment. The study incorporated individuals spending 50 hours doing a boring task, so they apparently found it difficult to be totally engrossed. The results also looked task specific in a way that those who could arrange horizontal lines couldn’t do the same when the lines were assigned differently.

The analysts used an action video game where players were supposed to shoot at targets and another one where they had to build something. Around 30 participants with amblyopia in the age-group 15 to 61 enrolled for the study. In the first trial, 10 persons engaged in the action game for almost 40 hours, 2 hours partly for 1 month. The second trial constituted 3 other participants playing the game involving no action for some time. Notably, while playing the games, participants sported a patch above their good eye. These tests apparently showed a 30 percent rise in visual acuity or median improvement of over 1.5 lines on the optometric chart. The investigators observed the performance every 10 hours of gaming and some of them presumably showed results in less than 40 hours too.To gauge whether it was video games or the patch work that exhibited the effect, the team conducted a third study.

About 7 participants were told to wear the patch over the good eye for 20 hours as a part of their usual activities like watching TV, or reading or web-surfing. After 20 hours they seemingly did not present any improvement in vision. On the other hand, while they told to wear the patch while playing video games for 40 hours, they seemed to show similar effects like the other study participants. As per the outcomes, the team did not find any difference in visual acuity among varied kinds of amblyopia, but anisometric subjects supposedly showed 50 percent better vision after 40 hours of playing video games. Li observed that the subjects who started off playing a non-action video game appeared to show more improvement after playing the game for additional 40 hours. However, will this effect maintain itself or will plateau over time is not clear. Playing a video game is more entertaining than just using a patch. Also, the latter may cause some awkwardness in children. However, this video game therapy should not be used without consultation of eye doctors.

The study is published in the August 2011 issue of the journal PLoS Biology.