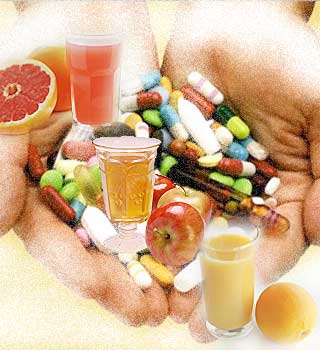 If you’re the one who loves fruit juices, this bit of news may just baffle you. Do you often wash down your medicines with fruit juices? A recent study proves that this may be a bad idea. The study has found that drinking apple, orange, grapefruit juice and other common fruit juices with certain drugs can hamper the beneficial effects of the medications.

The novel study was conducted by David G. Bailey, Ph.D. and researchers at the University of Western Ontario in London. The researchers administered healthy volunteers with antihistamine and fexofenadine. The drug was given with either a single glass of grapefruit juice, water alone, or water with naringin – a substance in grapefruit juice that gives it that bitter taste.

Dr. David Bailey, leader of the study, University of Western Ontario revealed to CTV News, “It is believed to be “a brand new type of food-drug interaction. The best thing would be to take your medication with water two hours before consuming fruit juices, to prevent or reduce the chance of this drug interaction. I think that this is the tip of the iceberg. I think that there may be many other types of foods that could also possibly cause an interaction.”

Dr. George Dresser of Victoria Hospital in London, Ontario, remarked, “Only a half to a third of the medication was actually absorbed.”

Results of the study show that on taking fexofenadine with grapefruit juice, only half the drug is absorbed as compared to its intake with water.

Some other findings of the study are grapefruit, orange and apple juices lower the absorption of the anti-cancer drug, etoposide. They also reduce the beneficial effects of certain beta blockers (atenolol, celiprolol, talinolol) that treat high blood pressure and prevent heart attacks along with cyclosporine, a drug that prevents the rejection of transplanted organs; and certain antibiotics (ciprofloxacin, levofloxacin, itraconazole).

The study however infers that presently there is no complete list of specific medications that will exhibit this type of interaction.

With an increased awareness of this drug lowering interaction among physicians, Bailey advises patients to have a chat with their doctor or pharmacist prior intake of any medication with grapefruit juice or other fruits and juices.

The study was presented at 236th National Meeting of the American Chemical Society in Philadelphia, Pennsylvania, August 17-21, 2008.