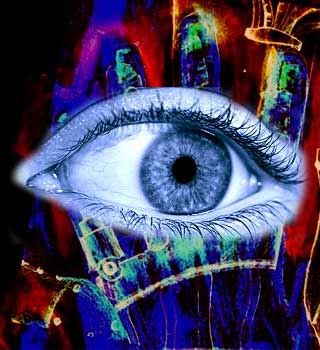 What if you woke up one morning and could see through things? Yes, just like an X-ray machine. Don’t get all worked up because a latest study reveals that our eyes may have actually evolved for X-Ray vision. The advantages of forward facing eyes have commonly been related to our ability to see through this confused 3D world for long.

The recent study by a scientist at Rensselaer Polytechnic Institute unveils a literally eye-opening head start to our binocular vision. Mark Changizi, principal investigator on the project and assistant professor of cognitive science found that our eyes have apparently evolved to see through things namely the possibility of X-ray vision. He explains that human and other animals that have eyes positioned in the same direction stretches to the limit the capacity to see in leafy environments and forests.

Referring to the proposition, Changizi remarked, “Our binocular region is a kind of ‘spotlight’ shining through the clutter, allowing us to visually sweep out a cluttered region to recognize the objects beyond it. As long as the separation between our eyes is wider than the width of the objects causing clutter — as is the case with our fingers, or would be the case with the leaves in the forest — then we can tend to see through it.”

He additionally added, “In today’s world, humans have more in common visually with tiny mice in a forest than with a large animal in the jungle. We aren’t faced with a great deal of small clutter, and the things that do clutter our visual field — cars and skyscrapers — are much wider than the separation between our eyes, so we can’t use our X-ray power to see through them.”

Changizi further asserts that when both eyes of a person are open, he can view nearly everything beyond his fingers on placing them in random directions. He additionally backs his hypothesis with the fact that a person has the ability to see through a pen to the world behind it with both eyes open. He however mentions that this is not possible with one eye closed.

The scientists analysed 319 species across 17 mammalian orders to identify animals with this impressive power of vision. He unwrapped that the position of the eye primarily depends on two variables-the presence or absence of clutter in an animal’s environment and the relative body size of the animal to the objects creating the clutter. Surprisingly, Changizi found that animals existing in non-cluttered environments had a tendency to have side-facing eyes. In comparison, animals in a cluttered environment had a wider field of binocular vision which implied that forward facing eyes lets such animals see past leaf walls.

Changizi described cluttered environments as leafy surroundings in which the cluttering objects are smaller than the separation between the animal’s eyes.

An important fact though revealed by the scientist is that humans now live in a non cluttered environment and may actually benefit from eyes facing sideways.

Funded by the National Institutes of Health in conjunction with Shinsuke Shimojo at the California Institute of Technology, the findings of Changizi’ s study have been published online in the Journal of Theoretical Biology.