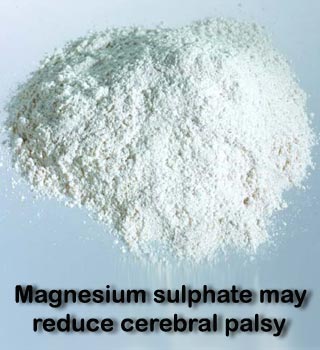 The authors commented “Foetal exposure to magnesium sulfate before anticipated early preterm delivery did not reduce the combined risk of moderate or severe cerebral palsy or death, although the rate of cerebral palsy was reduced among survivors.”

Researchers conducted the multicenter, placebo-controlled, double-blind trial to discover the effectiveness of magnesium sulfate in preventing birth defects. It involved analysis of 2,241 women who were at risk of going into premature labour between their 24th and 31st week of pregnancy. These women were randomly given magnesium sulphate either intravenously as a 6g bolus followed by a constant infusion of 2g per hour, or a matching placebo.

The surviving babies were closely followed for two years with a count of stillbirths or babies that died before reaching 1 year of corrected age and the incidence of moderate or severe cerebral palsy at or beyond 2 years of corrected age. The follow-up showed that primary analysis had no significant differences in the two groups. The combined risk of moderate or severe palsy or death was 11.3 % in the treatment group, and 11.7 % in the placebo group, with a relative risk of 0.97.

This study may have promising results in understanding cerebral palsy according to researchers. However they have not yet recommended it as a way of prevention for the same during premature labour.

These findings are the work of Dr. Dwight Rouse, from the University of Alabama at Birmingham, and colleagues. It is published in the 28 August online issue of the New England Journal of Medicine, NEJM.