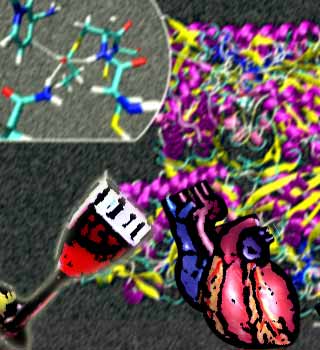 From a drink a day to novel drugs-we may just be able to enjoy a high fat cuisine with relatively lower risk of heart diseases. Scientist in the US claim to have discovered an enzyme that can break down alcohol while protecting the heart tissue against damage by free radicals including those caused by heart attack or surgery.

An important part of many biological processes, free radicals are highly unstable molecules. In their quest to attain stability, these radicals cause undesirable damage to cells, including damage to heart tissue following heart attack or surgery.

Conducted by researchers at the Stanford University School of Medicine in California, and the Indiana University School of Medicine in Indianapolis, the distinct study observed an enzyme called aldehyde dehydrogenase 2 (ALDH2), which is involved in breaking down alcohol and has been linked with reduced heart tissue damage following heart attacks in rodents. Next with the help Stanford High Throughput Bioscience Center, the team found a way to increase the activity of ALDH2.

Dr Daria Mochly-Rosen, a professor of chemical and systems biology at Stanford University School of Medicine, exclaimed, “We’ve found a totally new pathway for reducing the damage caused by free radicals, such as the damage that happens during a heart attack. It’s very easy for free radicals to find fat and oxidize it to aldehydes.”

As part of the study, researchers examined the enzymes that were activated in heart attacks in rats that had been pretreated with alcohol and some that had not. Interestingly, researchers found that alcohol increased the activity of ALDH2 during heart attack by 20%, and led to a 27% drop in the associated damage. A further investigation of the increased activity of ALDH2 by a tiny molecule called Alda-1 showed that the molecule works in a unique way. It reduced heart attack damage by 60% in the rat model protecting ALDH2 in turn from being attacked by the aldehydes it removes.

Researchers assert that this function of ALDH2 was completely unexpected. They had no idea it could be a key antioxidant fighting the free radicals. Present inside every cell and produced when free radicals react with fat molecules, the enzyme works by neutralizing the toxins produced by alcohol, aldehydes.

The study was based on previous evidence that heart muscle can be pre-conditioned to resist the damage caused by heart attack. In addition moderate drinkers were earlier known to have smaller and less severe heart attacks than teetotallers, but until now the underlying biology was a mystery.

Though clinical tests of Alda-1 have only been conducted on rats so far, researchers believe that it has great potential in a series of applications. These could include reducing damage from heart surgery, getting over hangovers and neurodegenerative diseases along with skin damage from the sun.

The study is published in the 12th September issue of the journal Science.