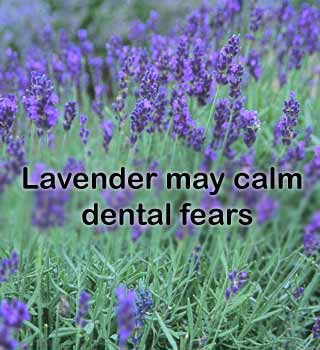 For years on end lavender has been known to be a calming agent. Its use to soothe headaches and induce sleep is a wide known fact. Well now the scent of lavender it appears may also help easing patients who fear the dentist’s drill. A novel study by researchers at King’s College London reveals how the scent of lavender may calm the nerves of patients who are scared to visit the dentist.

Metaxia Kritsidima, author of the study, mentioned, “A substantial number of people avoid going to dental surgeries because they are scared of the dentist, which can have a significant impact on their dental health. The anxiety experienced by these patients once they get to the dentist is stressful not only for them, but also for the dental team. Working under a state of increased tension may potentially compromise their performance, as well as lengthening appointment times. This is why finding a way of reducing dental anxiety is really important.”

“This is a significant difference and it was present regardless of the type of dental appointment. Our findings suggest that lavender could certainly be used as an effective ‘on-the-spot’ anxiety reduction in dentists’ waiting rooms,” added Dr Koula Asimakopoulou, co-author of the study.

The researchers analysed the anxiety levels of 340 patients using a questionnaire while they waited for a scheduled appointment at the dentist. About half of the patients were exposed to lavender oil during regular clinics over a four week period. Scent of lavender was administered to the patients by using a candle warmer that activated five drops of lavender oil in water. The other half was not exposed to the scent.

However according to the researchers the anxiety caused by the thought of future dental appointments did not seem to have been altered by exposure to lavender scent. Nevertheless, the team asserts that lavender scent could be an effective means of reducing anxiety in dental patients at the spur of the moment.

The study has been recently presented at the British Psychological Society’s health psychology conference at the University of Bath.