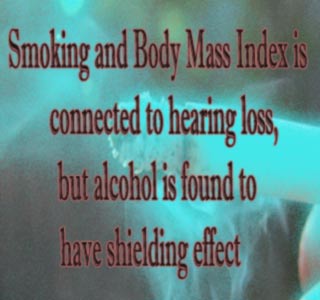 It is been noted that smoking and body mass index (BMI) lead to age-related hearing loss, according to one of the largest study which investigated into the risk factors for hearing loss, although alcohol has a protective effect.

The research is led by Erik Fransen in Professor Guy Van Camp’s research team at the University of Antwerp, the study has discovered that smoking, over-weight and occupational noise are some of the issues causing hearing-loss

The average alcohol consumption (at least one drink a week) appeared to have a protective effect. As per the study a single alcoholic drink comprises one glass of wine, spirit or beer. The result of high drinking was not examined.

Fransen and his colleagues conclude, “Hearing loss has always been considered an inevitable part of ageing, but more and more studies seem to indicate this is not necessarily true. Apparently a healthy lifestyle can be beneficial for hearing conservation at higher ages.”

This extensive European study included nine audiological centers in seven countries. Around 4083 people between the age group of 53 and 67 years old participated. Participants answered the questionnaire on their disclosure to possible environmental risk factors and their past medical records. The hearing of the participants was also tested. The data was scrutinized for the alliance with the potential risk issues and hearing loss.

The aftermath effects of smoking and alcohol consumption have already been studied prior, but the past results didn’t make any conclusions. The latest research verifies the exposure to noise accounting to hear loss in the later stages of life. The introduction to extreme noise is the reason for permanent hearing loss worldwide, according to the World Health Organization.

Results have been presented at the International Society of Audiology Congress in Hong Kong on June 10th.