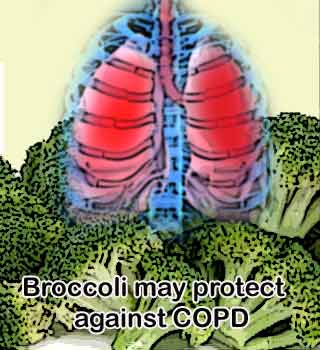 Broccoli could be a boon against COPD. You heard it right! US scientists at the Johns Hopkins School of Medicine in Baltimore claim to have identified a chemical in broccoli that supposedly possesses magical healing powers to halt the damage done in deadly lung disease- Chronic obstructive pulmonary disease (COPD).

Initiated by Dr. Shyam Biswal and colleagues, the research found a correlation between more severe COPD and a decrease in lung concentrations of a specific protein called NRF2. Defending the lungs against inflammation-related injury, NRF2 was of key focus.

Study leader Dr Shyam Biswal, remarked, “Future studies should target NRF2 as a novel strategy to increase antioxidant protection in the lungs and test its ability to improve lung function in people with COPD.”

“This is an important study for the 3 million people in the UK with COPD because of its findings about the imbalance of oxidants and antioxidants in the lungs. We know broccoli naturally contains important compounds but studies so far have taken place in the test tube and further research is needed to find if you can produce the same effect in humans”, revealed a spokeswoman for the British Lung Foundation.

Researchers have identified a compound in broccoli called sulforapane to increase the activity of the NRF2 gene in human lung cells which protects cells from damage caused by toxins. The same compound found in most brassica vegetables was earlier linked to protect against damage to blood vessels caused by diabetes along with lowering the risk of heart attacks and strokes.

The study involved the tissue samples from the lungs of smokers or former smoker with and without COPD for analysis. Interestingly, scientists discovered that COPD lung tissues had a decline in the activity and concentrations of NRF2-dependent inflammation defending antioxidants. The antioxidant imbalance in COPD lung tissue due to cigarette exposure was found to be restored by sulforaphane.

The study is backed by previous studies in mice. The studies had shown that disrupting the NRF2 gene caused an early onset of severe emphysema – one of the conditions suffered by COPD patients. The researchers additionally mention that increasing the activity of NRF2 may lead to useful treatments for preventing the progression of COPD.

The ability of the gene to turn on several mechanisms that remove toxins and pollutants which can damage cells is being explored.

The study is published in the American Journal of Respiratory and Critical Care Medicine.