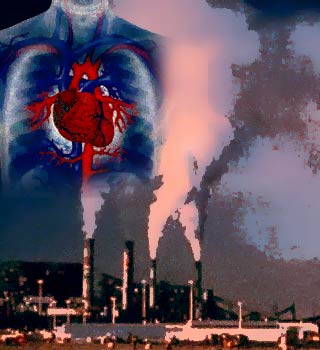 Damage to lungs is a widely acknowledged consequence of air pollution. But now air pollution it appears may be affecting your heart too. A recent report by researchers at the Harvard University reveals that people with serious coronary artery diseases are at increased danger as microscopic particles in the polluted air apparently affects their heart’s ability to conduct electrical signals.

The study suggests that heart-disease patients should limit their time outdoors especially if they live in a highly polluted city. This negative impact of air pollution on the heart should put heart patients on a high alert.

Diane R. Gold, M.D., M.P.H., the study’s senior author and an associate professor of medicine and environmental health at Harvard University in Boston, Mass, asserted, “We found that an elevation in fine particles, from non-traffic as well as traffic sources, and black carbon, a marker for traffic, predicted ST-segment depression. Effects were greatest within the first month after hospitalization, and for patients who were hospitalized for a heart attack or had diabetes.”

“When coal sales were banned in Dublin, Ireland, and black smoke concentrations declined by 70% within the next 72 months, cardiovascular deaths fell by 10%. Further research is needed to evaluate whether the pollution-related ST-segment depression that we see is related to increased heart muscle inflammation, reduced oxygen flow, oxidative stress, or increased risk of arrhythmias,” Gold additionally mentioned.

The new study involved 48 Boston-area patients with coronary artery disease. These subjects with a median age of 57 years had either been hospitalized for a heart attack, unstable angina or worsening symptoms of stable coronary artery disease. With 81% males, 40% had suffered a heart attack and 25% had diabetes. Using 24-hour Holter monitors, electrocardiograms were examined for the conductivity change called an ST-segment depression. This may indicate inadequate blood flow to the heart or inflamed heart muscle.

Patients were actually breathing healthy air constantly as the average 24-hour levels for all pollutants included in the analysis were below accepted or proposed National Air Quality Standard thresholds. The researchers were surprised to discover that increased levels of a pollutant called PM 2.5 and black carbon, which is found in traffic exhaust, in addition to sulphur dioxide, was associated with an increase in ST-segment depression.

These tiny particles, researchers suggest can harm people with coronary artery disease by crippling the ability of the heart to conduct electrical signals. They observed that patients recovering from a heart attack showed greater changes in ST segment depression on electrocardiograms as compared to other participants.

Researchers assert that further analysis is required to determine the effect of pollution-related impaired heart function on inflammation, reduced oxygen flow or risk of heart arrhythmias. They however emphasize on the guidelines recommended by American Heart Association and the American College of Cardiology. It suggests that heart patients, especially those who have had heart attacks must refrain from driving in heavy traffic because of the stress it can cause.

The study is published in the Circulation: Journal of the American Heart Association.